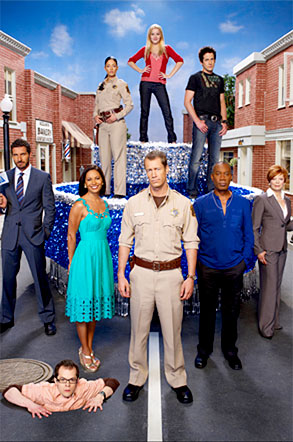 The easy answer to this is that these shows are produced by different companies, unlike the shared universes of Marvel or DC comics which are housed under big corporate umbrellas.  The logistics of having some Go’uald technology show up in Eureka or the teams for Sanctuary and Warehouse 13 teaming up together are pretty insurmountable.  Corporate brand identity and the question of who owns what portion of the story would prevent that from happening.  Witness the failed attempt for a Spidey cameo appearance in X3, Sony balked at the idea because they held the rights to film adaptations of the Spidey-verse.  A shared universe on a cable channel, unless intentionally built isn’t gonna happen any time soon.

That said, we (me and the P.I.T.’s) have long-held the belief that unless explicitly proven otherwise, our favorite TV shows and movies DO exist in one self-contained shared universe.  Obviously the universes of ‘2012’ and ‘The Day After Tomorrow’ are mutually exclusive.  But the universes of ‘Mission Impossible’ and ‘Star Trek’ need not be.  (OK I am not even going to throw open the door of the multiple quantum universes postulated by the Star Trek episode ‘Parallels’ or the Heinlein novel ‘Number of the Beast’).

We never quite put it down on paper before but the theory is basically “Unless the world depicted by the entertainment contradicts some other aspect of a different universe, the depicted universes are in the same quantum space.”  Simply put, Agent Mulder has somewhere in his files data on Alf, Mork, Uncle Martin, the unexpected flyover of Los Angeles by the USS Voyager, and Dr. Solomon.  The crew of any Federation starship could in fact through any number of time travel effects have an adventure with James Bond, Spider-Man or the Mission Impossible force.  Indiana Jones could very well be the great-great-(you figure it out)-great-grandfather of Cyrano Jones.  I know the folks at Hogwarts don’t concern themselves too much with the happenings of the muggle-world but would they consider Herbie the Volkswagen and enchanted beast?

What does this mean for your game, creative fiction, night at the movies? 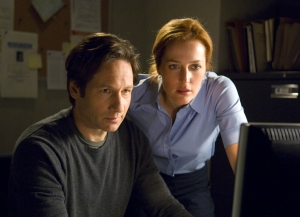 What this means for your game night is that as a GM you can throw in whatever characters you deem appropriate and not feel guilty about it.  Do you want your party of Elves to have an encounter with Spock?  By all means if handled correctly it could be a blast.

What this means for your creative fiction (another means of role play IMHO) is that if you can come up with a “LOGICAL” reason for another character to appear in your story then by all means run with it.

What this means for your geek-gasm night of movie watching is that you can fantasize that the information on the screen of Mulder’s computer is listing of Gordon Shumway’s recent activities (bonus points if you get that reference).  You can hide the smirk or laugh out loud because you know that the gods of Olympus will eventually leave Earth and Percy Jackson  behind and settle on Pollux IV.

Would it be cool if the was one big shared universe?  Yes.  But, then to my way of thinking there already is.

*editor’s note*  The DC Universe and the Marvel universe were revealed to be two separate quantum universes in the Marvel vs. DC limited series.  As such by our theory there at least two combined shared universes; one with DC super-heroes and on with Marvel heroes.

Visit Alien Graphics for all your design needs.

Greetings, welcome to the database of Stev, the Vulcan currently on assigment somewhere in the American Heartland.

Vulcan Stev's Database is a chronicle of his viewpoints on life, articles about the Pop Culture references in his favorite game, Wizard101, the home of Star Trek: Between the Episodes, a repository for his Demotivational Posters, and a place to store the cool stuff he puts together in Photoshop

Enjoy your visit. It is a logical place to be.

The crew likes these posts